We all spend time in a particular field of work and each of these fields has their own challenges. That much is axiomatic. And we tend to leave the axiom as it is.

In this new ongoing series, we speak to people in less understood careers and follow them on the job and shedding light on their fascinating career.

We begin this series by following Sammi Zhen, a drag entertainer and comedian.

Some people just have a funny bone, Sammi Zhen is one of them. We arranged to meet him over dinner for an interview and well, I couldn’t do the interview… I ended up laughing more than asking.

We ended up having a second interview and following him for a job he was to do for a corporate client.

That sense of humour has been instrumental in enabling Sammi to be one of the most well known drag entertainers in the regional scene. The drag entertainer and comedian has been plying his trade for over a decade and regularly shuttles between Singapore and Bangkok to perform in both cities.

Sammi is a drag entertainer. A drag entertainer, is a male who dresses up as a female and performs on stage. Sammi does not just speak and joke, he creates a full show to entertain the audience.

“Its the audacity of [this mental mismatch] that is key” Sammi explains, “the moment the audience watches a drag performance they are suspending disbelief.”

This allows Sammi to do things that non-drag performers cannot do, “I can tekkan (mess with) men and women all in the name of entertainment without coming off as a creep or a jerk.”

To be an attractive female, he needed to be an expert in making up. “I experimented a lot over the last decade in this trade,”Sammi continued as he tied his hair for the performance, “the principle is the same, you need to know your skin and find the right makeup for yourself.” 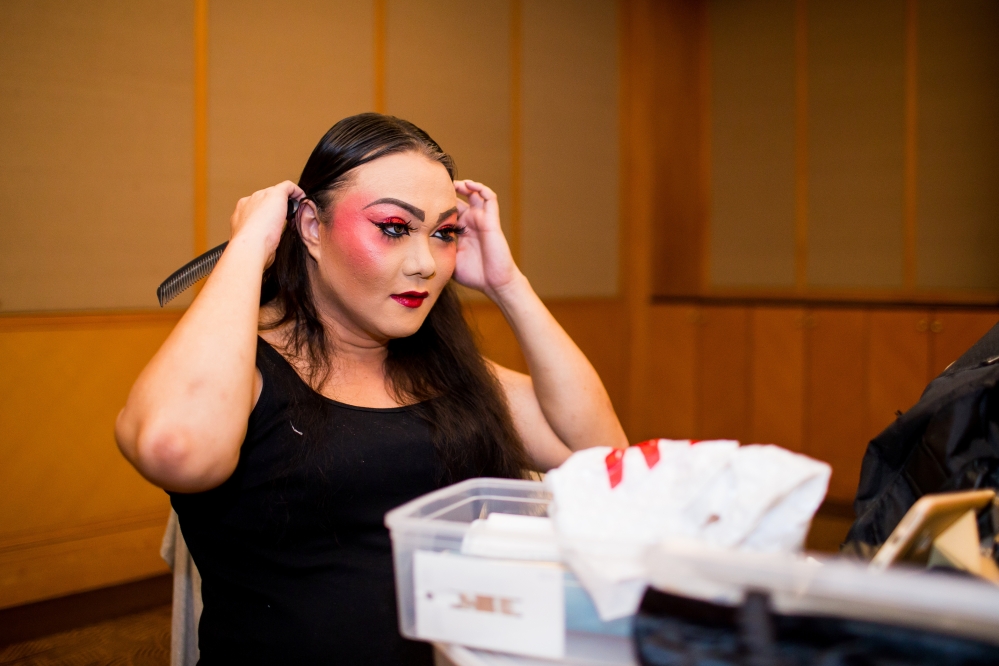 “To be fair though, there isn’t an industry rule. Some drag performers prefer to dress in an exaggerated way, I prefer to look as female as possible.”

Why not do the make-up at home though? He usually does it but since he has a second show later, he will touch-up on site he said. Time maybe limited but he’s much faster now because of experience. First started, he would arrive much earlier to makeup. Such make up on the streets would invite stares and photographs, as if he was a circus animal.

“I used to tell people that I just really liked Japanese culture, because it was socially unacceptable to have long nails, hair and thin eyebrows… However, when I perform in Thailand, I can wear my full gear to the venue and no one would bother.”

He was going on stage in Thai garb that night. “I got the pieces in Thailand and set them together in Singapore,” he tells me, “the pricing is about the same but the workmanship is not as good as Singapore…”

“Help me take a look, does everything look fine?” 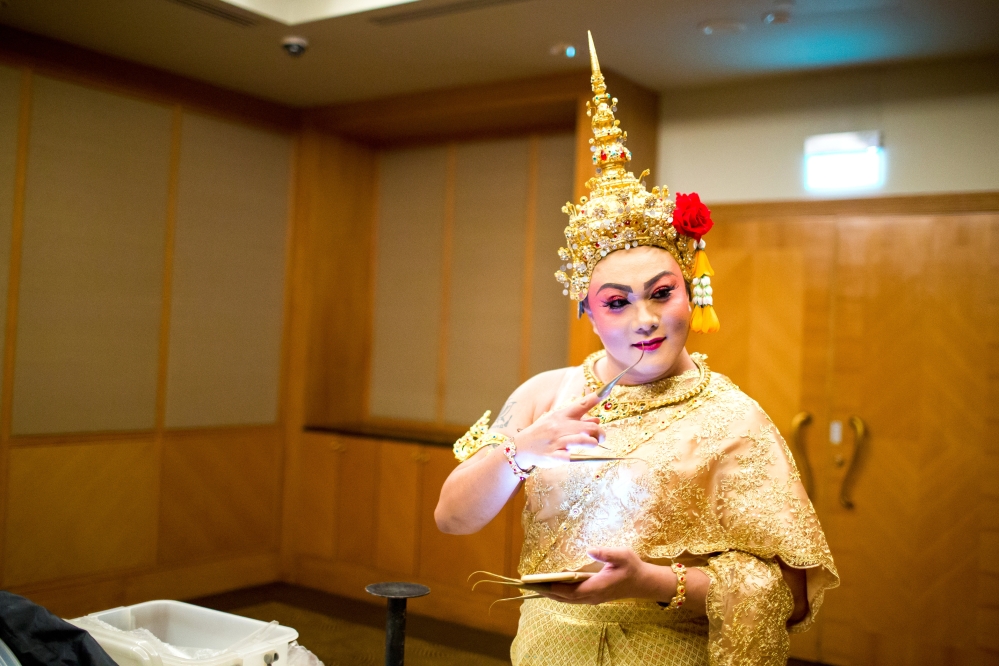 I fumble to for a yes, everything looked in place I think. Not that I noticed. Okay show time he said as he stood. Just as he exited the door he paused, there was something that I did not spot but the dedicated professional did.

He exited the preparation room and we followed. A enthusiastic guest approached him. I couldn’t quite make out if the guest was being friendly or flirty. 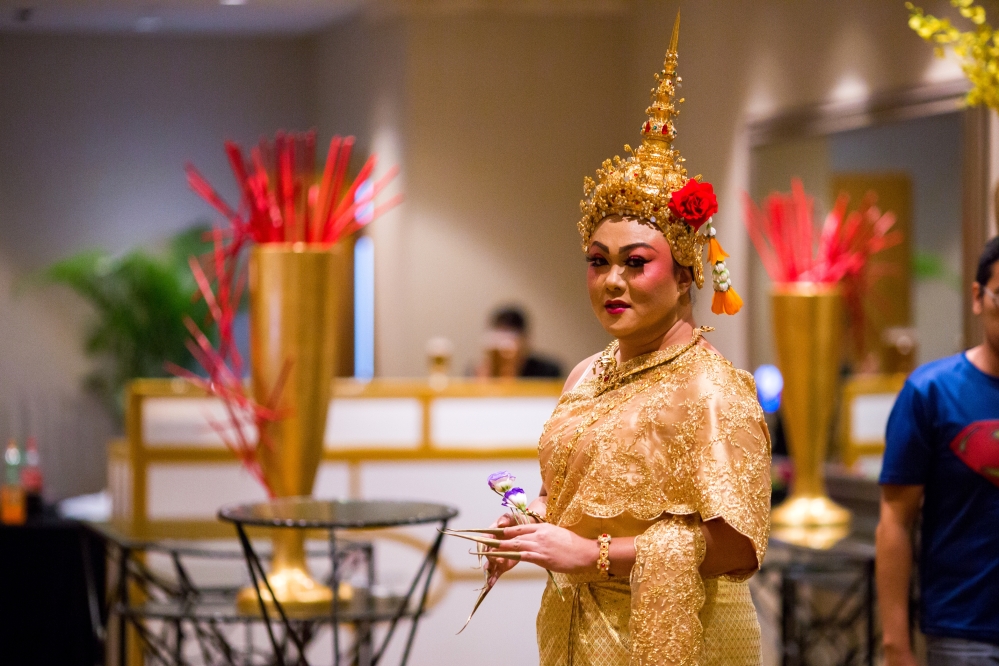 Sammi handled the guest calmly and looked at me, a grin on his face, “this is mild.”

He had experienced much more intense experiences. An intoxicated guest once danced with him, kissed him on the hands and face and took a bangle in an attempt to flirt. “I let him have it, in a humourous way, when I got the mic.”

Another time, the wife of a dinner guest went berserk when he joked with her husband, quieting in embarassing on realising that he was a cross-dresser.

A third time, an obviously drunk guy went straight for his fake breasts. “I took out the bra pad and asked him how he liked my fake breasts.”

“Your get up is very convincing though…”

“Well, as long as you don’t look too closely…”

The anecdotes surprised me. All these were stories arose when the audience member assumed that Sammi was female. If this is what a male drag performer faces, what about female performers? Would I have even heard of this stories if the performer I was speaking to was a biological female?

Thankfully the audience that day was receptive, open and respectful. 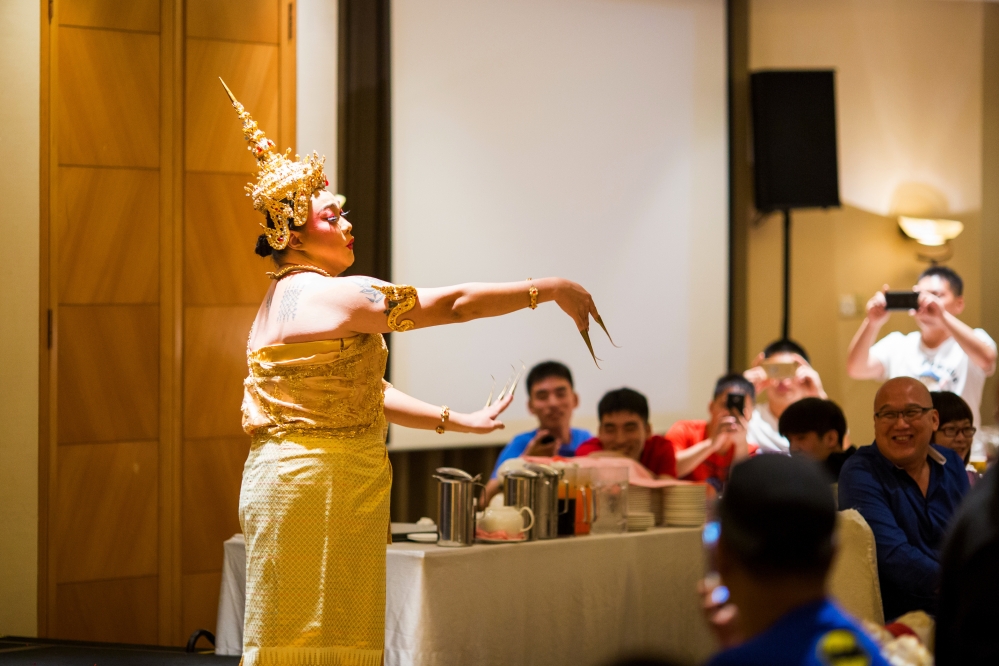 Many in the audience whipped out their phones to take pictures. A cross-dressing performer is still an anomaly in Singapore.


A video of Sammi at another event

He left them in stitches and made a grand exit. And then off he went for another performance.

I sneaked in a few questions while he was changing. Were those jokes rehearsed?

“I have very few stock jokes, most of my humour is unscripted and off the cuff… because it has to be topical.”

“But with an Asian audience, I usually have to be slightly tamer and avoid overly specific and personal jokes. You can make fun of them, but don’t overly embarrass them.”

Its not a skill something that you can gain overnight, he has been in the business since 19, performing even before he entered National Service. Sammi began his career as a trainee at the Nanyang Academy of Fine Arts. His intention in the art school was to learn theatre, but the courses in NAFA then were too culturally Chinese to suit his liking and he left the programme without graduating.

His skills today were honed in the School of Life.

Within 30 minutes Sammi went from a Thai dancer to a Japanese Geisha. 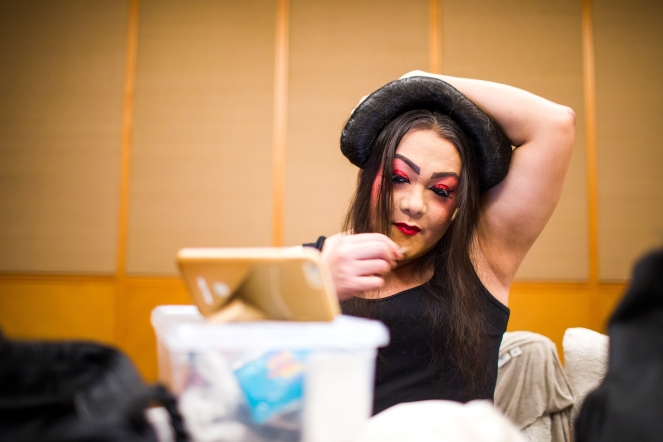 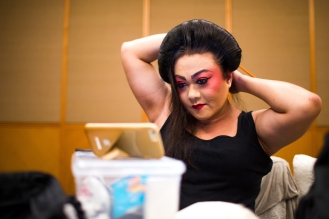 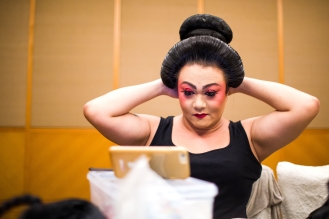 This time around his engagement involved him mingling with the crowd without any stage performance. 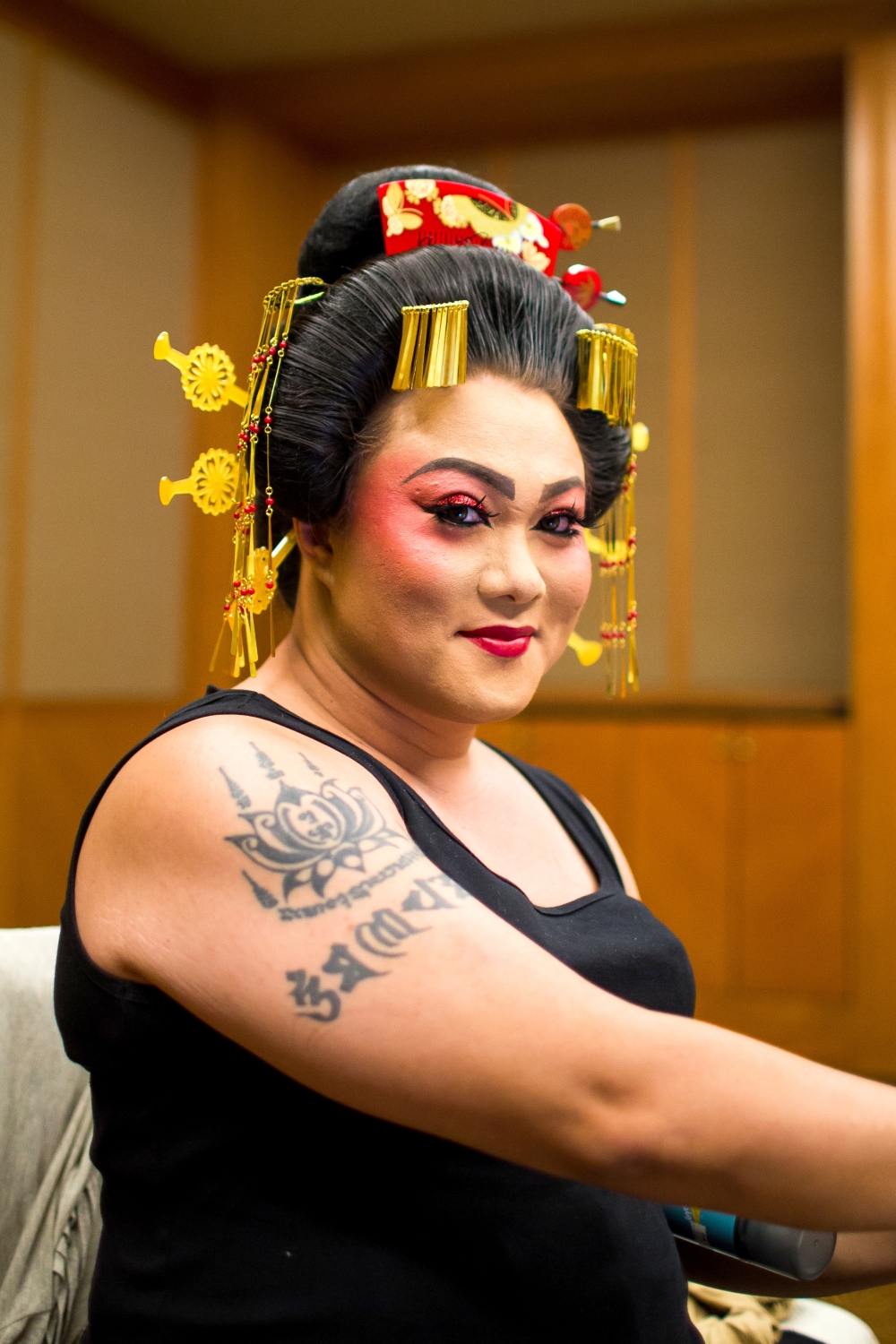 The gigs are all much smaller these days because entertainment budgets have been slashed. So large fancy shows have given way to smaller performances. Sammi makes up for the decreasing big payouts by doing more small shows.

His main work days are weekends and evenings. It’s not an easy job. Quick on your feet, skilled with your makeup and dressing, calm in strange situations. More importantly, he has to make us laugh and leave happy.

He continues because he loves being an entertainer, “its very rewarding seeing your audience laughing… I still get goosebumps when I experience that.”

He turned and walked through the door for his next performance.

The crowd erupted in cheer.